(Minghui.org) Since the publication of the Nine Commentaries on the Communist Party in 2004, more and more people have lost any confidence they still had in the Chinese Communist Party and resigned from it.

As of April 2014, more than 160 million Chinese people have declared their intention to quit the Party itself, or its affiliates, the Youth League, and/or the Young Pioneers. They do so online here. 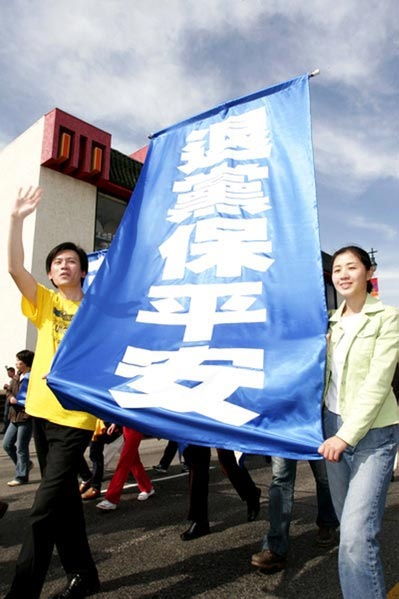 Rally to encourage people to withdraw from the Party 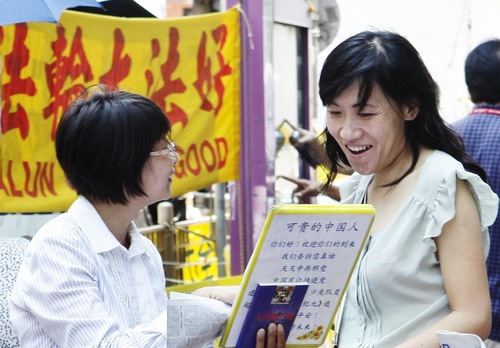 To facilitate the withdrawals from the Communist Party, hotlines have been set up for interested people to call in. In addition, Falun Gong practitioner-volunteers regularly visit local communities where Chinese people congregate to spread the word about the importance of the withdrawals. It is the volunteers’ experience that many people can’t wait to break free from the Communist Party and its affiliated organizations.

Below are the stories of some of the people quitting the Communist Party, collected by the hotline in Toronto, Canada.

One afternoon, volunteer Heyue spotted an elderly man she thought might be from China, so she asked him, “Sir, are you from China?”

“Yes! I just moved here not long ago,” he acknowledged.

Heyue commented, “Have you heard that everyone is withdrawing from the Party for their own safety? Have you done it?”

He continued, “Do you know what I used to do? I was a bodyguard on the security detail of Lin Biao [the former No. 2 Chinese leader, just below Mao Zedong]. After Lin’s airplane was shot down on his way to defect to the former Soviet Union, all our weapons were confiscated and we were forced to retire from the army. Some of my friends committed suicide, including my supervisor. He couldn’t come to terms with the fact that Lin (once labeled Mao’s closest friend) would want to betray Mao. Working for the Party is like walking a tightrope. Lucky me! I got out just fine, but some of my military friends weren't so fortunate.”

Heyue suggested, “If you read the Nine Commentaries on the Communist Party, you will have an even clearer understanding of just how bad the Party really is. When the Party collapses, all those who have joined and vowed to remain loyal to it will go down with it. Many people are quitting the Party to be on the safe side.”

The man gave Heyue his real surname and asked her to pick an alias first name for him. He thanked her sincerely for her help. [People often withdraw using aliases to avoid any harassment of themselves or their families by agents of the communist regime. Regardless of the name they use, their withdrawal shows their conviction.]

A Railway Bureau Official Sees One Person after Another Withdraw

An official from a railway bureau under the jurisdiction of the Ministry of Railways called the hotline in mid-May and provided his bureau director’s phone number.

He had withdrawn himself a while back when he happened to answer a call from a volunteer. They chatted for half an hour and he realized he should quit the Party. He also gave the volunteer the phone numbers of two supervisors who were veterans just like him.

The volunteer later called the supervisors and was able to help them quit the Party, too. Both of them gave her their real names and expressed a desire to keep in touch with her. One of them admitted he was a Party secretary.

Another volunteer contacted the bureau director. After more than ten minutes of conversation, he agreed to withdraw. In addition, he offered the phone number of yet another director.

The second director was initially very rude, asking, “Why should I quit when I have so much trust in the Party?” But eventually he came to understand just how bad the Party really is and used his real name to withdraw. He admitted that their long conversation had made him very emotional.

All these people who have withdrawn help spread the word everywhere they go. According to one of them, among the more than 100 Party members in that railway bureau, more than half have now quit the Party.

4,000 People Anxious to Part Ways with the Communist Party

In mid-June 2013, a gentleman from Guangdong Province called the Toronto withdrawal hotline requesting help with 4,000 resignations. He had quit the Party himself at an earlier time and that day he was helping his co-workers in a factory.

He told the volunteer who answered his call, “Nowadays everyone is angry and sad. It’s so hard to just live a decent life. Everyone wants to quit [the Party].”

When asked about his relationship to the 4,000 proposed resignations, he replied, “We are all good buddies who help each other and share the same ideology. Here in the south we run into so many conflicts with the police. Whenever there is a protest, it's no problem at all for 10,000 people to show up. All these people I mentioned want to quit the Party, but it’s almost impossible for me to gather all their names.”

He asked the volunteer to use popular surnames such as Yu, Wu, and Wei to process the withdrawals with aliases for his co-workers.

The volunteer had never had such a large-scale request and informed him that she needed to consult someone else. The man left his real name and phone number for the volunteer to call back.

Ten days later, he called again, checking on the progress, and was very happy when told everything was all set and he could give his friends a satisfactory answer.

What happened to a paralyzed man who had been bedridden for eight years in Henan Province caused quite a stir among the locals.

Once a village accountant, Mr. Sun had a relative in Canada who told him about the facts about Falun Gong and the unjust persecution. This relative advised him to repeat, "Truthfulness-Compassion-Forbearance is good and Falun Dafa is good" and to quit the Youth League and Young Pioneers he had joined. Mr. Sun obliged and in just two weeks, not only was he able to get out of bed, but he was also able to do household chores and work in the field.

His whole family was awestruck and immensely grateful. They began to repeat the same phrases and soon benefited as well. In particular, his grandson's liver disease was cured and he found a decent job with handsome pay in Beijing.

In March this year, a branch manager of a large Beijing bank called the hotline requesting help to withdraw a total of 12 people, including himself and several other managers.

He also told about a meaningful encounter he had had with a Falun Gong practitioner at a department store.

“Last year I met a practitioner at Bailong Department Store and we hit it off right away. We chatted for more than three hours, and she let me know what Falun Gong was really all about. She advised me to say, ‘Truthfulness-Compassion-Forbearance is good, Falun Dafa is good’ every day.

"I have been repeating and writing out those phrases for a year now. Every time I say or write them, I feel full of energy. I used to rely on sleeping pills to get me through the night, but now I don’t need any help. Moreover, all my troubles have disappeared and my life is now smooth sailing. It is truly wonderful.

"Now my parents, relatives, and friends also say the phrases the practitioner taught me. When I visit my clients, I share the phrases with them, too. Many people in my banking circle wanted to know the secret of my good fortune, so I told them as well. They were all eager to withdraw from the Party and asked me to help, but I couldn’t find the woman at the department store. I had no clue how to withdraw until one day I found your hotline number on a flyer. So I called in.

"I realize that money and power are just fleeting things and that returning to one’s true home is the real meaning of life. Now I can get into a tranquil state in meditation. It is such an incredibly wonderful feeling.”

When several volunteers went to a large Chinese supermarket in Toronto, they saw about 30 people from the Canadian Association of Fujianese Friendship waiting for their gathering to begin.

The volunteers went up to them and struck up a conversation.

One volunteer said, “You’re so lucky to have come come here, what with all the disasters in China.”

An older man immediately asked, “Do you practice Falun Gong?”

The volunteer answered, “Yes, I do! Millions of people from all walks of life all over the world are practicing Falun Gong. The world needs Truthfulness-Compassion-Forbearance. Falun Gong has spread to more than 100 countries. Only Jiang Zemin in China fears this wonderful practice.”

Another person interjected, “Do you still want to go back to China?”

This volunteer replied, “Of course we’ll go back. China has 5,000 years of history. When the CCP collapses, I’m sure everyone will rush to visit China.”

A third person asked, “You guys ask us to quit the Communist Party. What Party should we join then?”

A second volunteer explained, “We don't get involved in politics. We do not join any political parties. The regime is on its last legs—we don’t want good people to go down with it. That's why we ask people to withdraw their memberships.”

Everyone smiled, and the volunteers helped them withdraw.