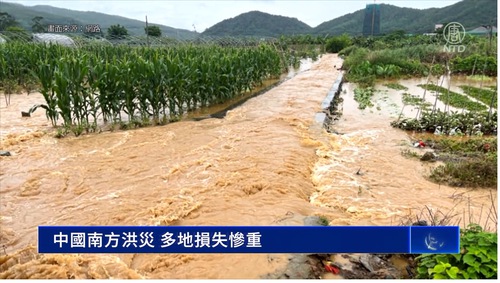 Flood of the Xi River Hits Many Areas in Guangxi Province

Two floods occurred in the Xi River in Guangxi Province within one week. The water level of many rivers continued to rise. Flood peak passed through Wuzhou, Pingnan County, Guigang City, on June 7 and 8, 2022, causing floods along the river. A video showed flooded roads and houses along the river as residents rowed out.

According to Chinese media reports, on June 7, the second flood of the Xi River this year approached Wuzhou City, Guangxi Province. Affected by the upstream water, the water level rose at a speed of 8 centimeters per hour. According to the forecast of the Wuzhou Hydrological Center, the peak water level would be about 20.5 meters.

Due to continuous heavy rainfall and flooding of the Xi River, the Qian River and Xun River in Guiping, Guangxi Province recorded the highest water level this year. The peak water level of 30.06 meters in the Pingnan section of Xun River exceeded the warning water level by 1.06 meters. The flood discharge at the Dateng Gorge Water Hub increased. A video on June 7 showed that the Wu River, a tributary of the Xun River in Pingnan County, Guigang City, swelled sharply, and the pavilions by the river were almost flooded to the top.

In the previous flood a week ago, the water level of the upstream Longtan and other reservoirs was close to the warning line for flood discharge. Floods also occurred in Guigang, Hechi, and Liuzhou.

Heavy rains were also reported in many areas in Fujian Province. Gutian Town, Shanghang County, received more than 236 mm of rainfall from 8:00 a.m. on June 5 to 12:00 p.m. on June 7. Local flash floods occurred in Gutian Town, causing landslides and damage to main roads, dams, and power lines. A total of 185 hectares of farmland were damaged.

Some electric poles in Gutian Town, Shanghang County collapsed. Power and communications in some villages were interrupted. A total of 1,132 people in the county have been evacuated.

Severe floods occurred in the urban area of Guilin, and the entire Li River was closed for transportation. The ethnic market, Lusheng Square, and old streets in the county were flooded.

Heavy rains also poured down in northern Liuzhou, Guangxi Province from June 2 to June 6, and some areas had extremely heavy rains. At that time, more than 43,000 households were out of power.

Hanfang Town, Yangbu Township, and Wangmudu Town in Ganxian District were severely affected by the floods. Some primary and secondary schools were closed. There was also a flash flood in Hanfang Town, Ganxian District, submerging a lot of farmlands, and turning Xu Town into a sea.

Hunan Province recently experienced the longest and most intense rainfall this year. So far, 1.8 million people have been affected, with 10 dead and three missing.

The China News Agency reported that the Hunan Provincial Government Information Office stated on June 8 that during this wave of heavy rainfall, a total of 1,195 houses collapsed or were severely damaged, and 286,000 people were placed under urgent evacuation.

Heavy rainfall caused serious damage to a large number of industrial and agricultural infrastructures in Hunan Province. The affected area of crops in the province was 1.4 million acres. Eighty-eight places on expressways in the province were damaged by flooding. A total of 129 ordinary highways were blocked in 218 sections. Power stations and facilities in some areas were damaged. Power for 560,000 people was affected. And 2,799 geological disasters were recorded.

The Hunan Provincial Meteorological Bureau forecasted that there would be heavy rainfall in southern Hunan Province from June 9 to 12.

Category: ﻿Life and the Universe