They traveled westward from Graz in south-central Austria to Klagenfurt, Villach, and Bregenz on the Swiss border, and went back eastward to Innsbruck, Salzburg, Linz, and Sankt Pölten. Along the way, they informed people of the Chinese Communist Party’s (CCP) persecution of Falun Gong. They collected signatures from many people.

Activity in Graz, the Capital of the State of Styria 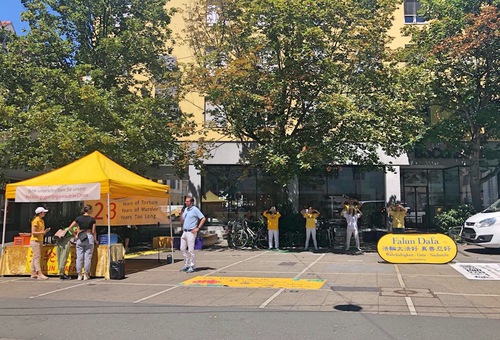 Practitioners introduced Falun Gong and raised awareness about the CCP’s persecution in Graz on July 18.

Falun Gong practitioners first went to Graz, the capital of the Styria State on July 18. A history teacher visited their booth to sign the petition calling for an end to the persecution. He said, “I must talk about this topic in my class and let my students know the truth.” He took some Falun Dafa informational materials about the CCP’s organ harvesting from living Falun Gong practitioners and offered to show a film about the persecution in his school. 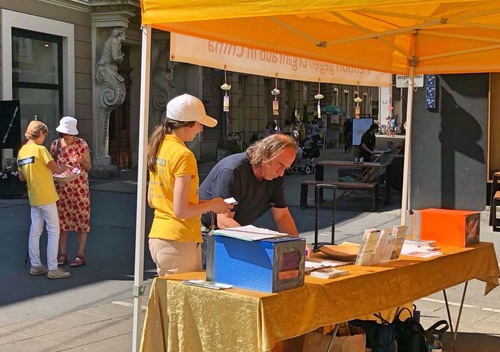 A history teacher signs the petition calling for an end to the persecution.

Another man asked for more information about Falun Gong. He said that he had just resigned from his job because he hoped to have time to explore the meaning of life. He also wanted to find a suitable spiritual practice, that he had a predestined relationship with Falun Gong practitioners, and that he would go to the group practice site to learn the exercises.

Activity in Klagenfurt, the Capital of the State of Carinthia 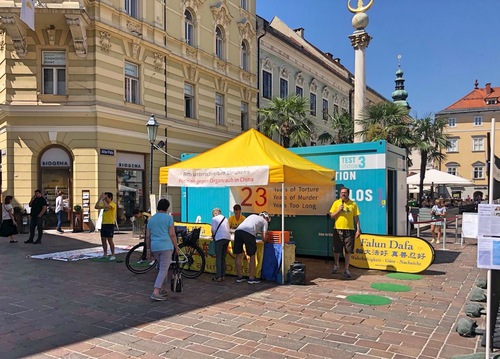 Practitioners introduce Falun Gong and bring attention to the CCP’s persecution in Klagenfurt on July 19. 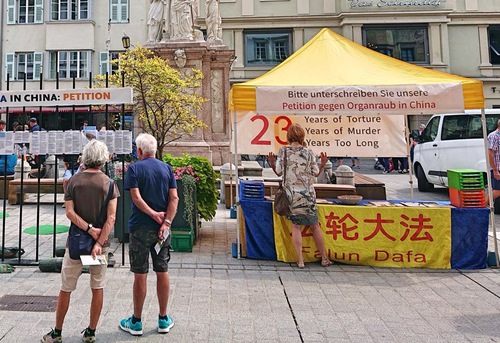 Passersby stopped to find out more about Falun Gong.

Practitioners continued their westward journey to Klagenfurt, the capital of Carinthia, and the City of Villach. In Klagenfurt on July 19 they met the famous Austrian musician Andreas Gabalier and his cousin. His music is well known in the area, with more than 4 million views on YouTube. After reading the flier, his cousin asked Gabalier if he wanted to write a piece for the practitioners. Gabalier said that he had noticed Dafa practitioners clarifying the truth when he was in the cafe and would continue to pay attention.

The car tour continued westward to Bregenz, the capital of Faralberg on July 20. The practitioners met two musicians who were in the town to participate in the opening ceremony of a local music festival. One of the musicians was from China, and the other was from Russia. They read the practitioners’ display boards for a long time.

A practitioner told them that over 4,000 people have died as a result of the CCP’s persecution and exposed the CCP-staged self-immolation incident on Tiananmen Square. The Russian musician quickly understood the CCP’s deception. The Chinese musician thanked the practitioners for giving him information different from the CCP propaganda he'd heard since childhood. He also accepted the Dafa materials about renouncing the Party. 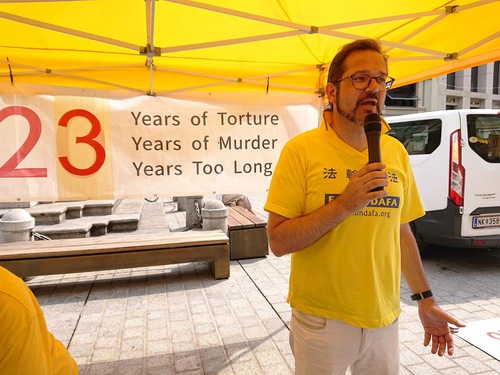 A practitioner explains Falun Gong and condemns the CCP’s persecution to passersby.

July 22 was the last day of the tour to clarify the truth. The car tour went to Linz, the capital of Upper Austria, and Sankt Pölten, the capital of Lower Austria. There were street artist performances in Linz that day. The practitioners’ booth also attracted artists from various countries who were interested in learning about Falun Gong. Falun Gong leaflets in different languages were circulated. 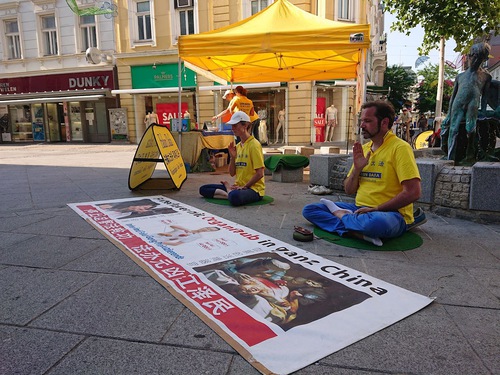 The five-day Lotus Tour across seven Austrian states and eight cities had a successful conclusion. Practitioners said that they were happy that many people with predestined relationships could take this opportunity to learn about Falun Gong and condemn the CCP’s persecution.

Background: What Is Falun Dafa and Why Is the CCP Persecuting It?

Falun Dafa (also known as Falun Gong) was first introduced to the public by Mr. Li Hongzhi in Changchun, China, in 1992. The spiritual discipline is now practiced in over 100 countries worldwide. Millions of people have embraced the teachings, which are based on the principles of Truthfulness, Compassion, and Forbearance. They have learned the exercises and thus have experienced improved health and well-being.

Jiang Zemin, former head of the Chinese Communist Party (CCP), perceived the spiritual discipline’s growing popularity as a threat to the CCP’s atheist ideology. On July 20, 1999, he issued an order to eradicate the practice.

Under Jiang’s personal direction, the CCP established the 610 Office, an extralegal security organization with the power to override the police and judicial systems, and whose sole function is to carry out the persecution of Falun Dafa.

Minghui.org has confirmed the deaths of thousands of practitioners as a result of the persecution over the past 23 years. However, the actual number is believed to be much higher than known to practitioners. Countless practitioners have been imprisoned and tortured for their faith.

There is concrete evidence that the CCP sanctions the harvesting of organs from detained practitioners, who are murdered to supply China’s organ transplant industry.

“Painting: A Pendant that Carries Blessings”

“My Personal Experiences with Divine Manifestation”